We seek
to nurture crafts of hand and voice
created with love and effort
in tune with nature, traditions
living and lost
in search of languages
silent and unspoken
languages expressed through
embodied action

Center for Embodied Knowledge has been conceived for preserving, protecting and promoting non textual civilisational heritage of India.

We document the processes of shuddha (authenticity), desi (indigeneity), sthana (locality) in embodied traditions like crafts, handlooms, arts and all other indigenous knowledge practices,

enable the consumer’s journey to become a rasika, a spiritual aesthete. 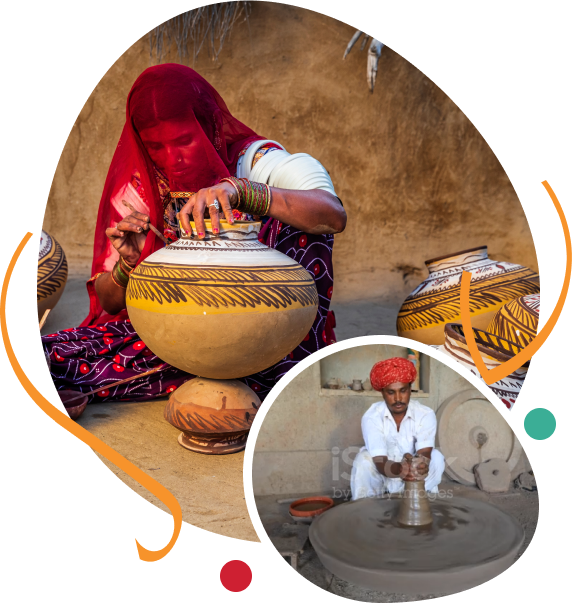 Center for Embodied Knowledge intended to be a platform for the development and promotion of indigenous knowledge systems. And when we were to design a visual Identity for it, we were left wondering about “How” and “What” the traditional Dancers, Musicians, Weavers, Craftsman, trapeze artists, players “know” when they are performing their Act ?...

Filming lives of people in conflicts, Akanksha has come to understand that it is the Indian peoples connection with the Sacred - in all diverse forms and colours – that has been the anchor, through and beyond their crises.

Over more than a decade now Akanksha has also been conducting meditation groups based on various wisdom traditions of India .

Sunny has worked with and mentored people as well as start-ups at all levels and in a number of industries across India.

For 20 years he committed his energies and innovations to help in the transformation of the Indian crafts sector focusing on turning sustainable development into viable enterprises.

Hari Vadlamani is a serial entreprenuer, venture investor and the founder of INDICA and NICE. He is deeply passionate about Indian cultural heritage and more specifically Art, Craft, Design, Cuisine and Philosophy. He is a Dharmic / Indic Liberal.

Chintz to Prints: Collaboration with Antāti

CEK Announces a Grant & Collaboration with The Handloom Futures Trust

to nurture crafts of hand and voice
created with love and effort
in tune with nature, traditions
living and lost

to know their past, processes
indigeneity, locality
and infinite continuity

to learn their wisdom
unsaid yet expressed
through beauty and form

a fraternity of artisans, performing communities
celebrate and revel with them

they own their traditions, in every way there is,
through mind, law and social recognition

to showcase their knowledge
in ways more than one

to turn consumers into seekers
turning them into co-travellers

for we are seekers of eternal delight
in togetherness

Center for Embodied Knowledge intended to be a platform for the development and promotion of indigenous knowledge systems.
And when we were to design a visual Identity for it, we were left wondering about “How” and “What” the traditional Dancers, Musicians, Weavers, Craftsman, trapeze artists, players “know” when they are performing their Act ? How does one absorb the knowledge that is taught by a teacher and melt it to make it so deeply one’s own and yet be able to pass it on for generations to come? Where is this knowing positioned ? How much of the mind and how much of the body is involved in this process of learning?

With a growing interest in Indic knowledge systems, we began to unearth and learnt that, Unlike the Cartesian separation of the Mind and Body, Indigenous knowledge systems believed that knowledge is created in the unison of the mind, the body and the heart. A resultant of the constant flow of senses and action that occur within the experiences and the ever-changing unique social contexts of an Individual.

In the Ancient Indian texts (Mundakopanishad, 1.1.4) and jaina texts, knowledge is defined as a combination of Pratyaksha jnana (that which is perceptible to the eye or visible) that is learnable and Paroksha jnana (beyond the range of sight) which is realised by the act of sadhana (Process of preparation) through which the knowledge gets constituted in our inner self - that there is no separation between a subject that knows and an object that is known.

The Indian texts also talk of 18 “Vidyas” (theoretical disciplines) that get applied and realised in the 64 Kala’s (Crafts). The "crafts" were to have a direct relevance on day-to-day life of the people and most of them are still a part of Indian life. For these traditional craftsmen, the craft is not only their profession, it is also their worship. In our culture a craftsman/dancer/weaver is held in high esteem as a sadhaka, a devotee whose entire self attaches with great reverence to the object and both evolve together. The training is a form of tapa, a dedication and the primary virtue they aim to acquire is a state of physical, mental and emotional equilibrium - ekagrata.

With these thoughts at the heart of the design process, We wanted to create an expressive symbol that embodies the “Unison”, “equilibrium”, “As a seed that self iterates” while following the basic design criteria for a visual identity being simple, Appropriate to the audience, distinct and Versatile. Inspired by the play of creating shapes and forms by the use of single strand of thread, we worked on achieving a coherent form starting with a dot as the “seed” at the position of the heart and the movement of this seed is captured in a single gestural stroke that develops as an agile human like-form and coming to a full circle while it passes through the hands and the mind and is finally constituted in the inner self, represented by the turquoise dot. 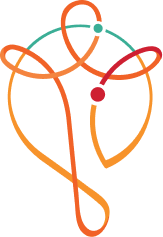 A harmonious split complementary colour scheme starting with the Red at the heart representing passion and moving on to shades of orange towards the body representing creativity and ending with Teal/ Turquoise at the portion of the head was chosen representing wisdom and Tranquil energy.

The wordmark was made with Typeface “Stardos”. With its very stencil-like but humanist style, it bridged the expressive symbol and brought in a more formal graphic language to the Identity. The choosing of the word mark was also inspired by the fact that “reading” itself is an embodied activity that even when a form is unfinished, the recognition happens due to the familiarity of the form over time.

With its inspiration firmly rooted, the expressive but universal visual form, the colours and the wordmark combined to create a visual Identity that embodied the center’s core intent and bring the communicative depth and clarity about the work the center and its grantees do.